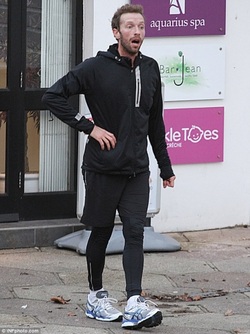 Latest photo: of Chris Martin at the gym, London (30 Jan'13)
Coldplay have been forced to cancel the previously postponed Latin America tour expected in 2013. A short note from the band on the official webpage on 31st January read: “Dear friends in Latin America, We’re sad to say that, due to circumstances beyond our control, we’re unable to reschedule the postponed Mylo Xyloto tour dates in 2013. For this we’re very sorry. It may seem small consolation now but we’ll definitely have your corner of the world at the front of our minds when the time comes to do it all again. Thank you for your incredible patience and support. With love – Chris, Will, Guy, Jonny.” 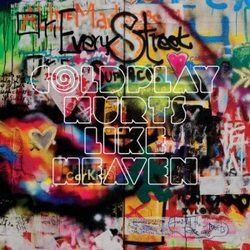 Five singles into their latest album, ‘Mylo Xyloto,’ and Coldplay are still going strong. In an era when many bands focus on a few standout tracks to base an album on and then surround them with filler, with ‘Hurts Like Heaven’ (which is soon to be released to radio), the British boys prove ‘Xylo’ is deep enough to warrant the string of singles.

Starting with nearly a minute wash of delay-drenched guitars and dreamy synths, ‘Heaven’ seamlessly transforms into a pop ditty, with Will Champion’s steady beat providing the backbone for Jonny Buckland’s tone-bending guitars and Guy Buckland’s melodic bass. Somehow the three of them manage to channel the intro’s atmospherics into a melodic, upbeat groove that recalls My Bloody Valentine‘s dreampop and the Jesus and Mary Chain’s lighter, catchier fare.

“Oh you, use your heart as a weapon / And it hurts like heaven,” Chris Martin sings over all the prettiness. We’re not sure if he purposefully invokes the imagery of ‘Just Like Heaven,’ but purposefully or not, the Cure classic certainly comes to mind. Either way, it’s a fitting reference, as this is as close as Coldplay come to sounding like a ray of sunshine shining on their eternally bummed British brethren. 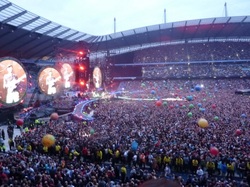 Your Houston News: With British too-old-to-be-a-boy-band Coldplay in town, ladies, I thought it would be fun to help you ensnare your date-to-be between some especially soft rock and hard place. I know, you’re thinking such meditative, romantic fare strays pretty far from the standard guy-rock bombast of, say, AC/DC, Metallica or any number of those spandex-clad bands from the 80s that never seem to really go away.

Well, that’s probably true. Still, this outing offers some interesting options as far as strategy goes. First of all, you have the element of surprise working in your favor. After all, when is the last time you – with a straight face, anyway – asked him anything as instantly confounding as, “Hey, Sweetie, do you think we could go see a rock band at the Toyota Center this week?”

If that doesn’t cause your beau to stop dead in his tracks and turn his baseball cap around backward, I don’t know what will. You now have his attention – undividedly. Next comes the tricky part. He’s going to ask what band is playing. Unfortunately, since Coldplay has sold about a billion albums and pops up on pretty much all radio stations, television shows and public address systems on a regular basis, he already knows what they sound like, too. Don’t get me wrong. It’s not that all men hate Coldplay – at least not at a Maroon 5 Super Bowl halftime show level – it’s just we guys prefer a bit more bang for our arena-rock buck. Simply put: A wild man thrashing around on a huge drum kit tops Coldplay frontman Chris Martin’s poetic musing and piano tinkling every time.

That said, there are ways in which this outing will sort of resemble a rock concert, and that is what you must concentrate on. If, for example, the mere mention of Coldplay causes your beau to do that eye-rolling thing or, heaven forbid, turn his cap back around the right way, let him know there will be a massive, massive laser show – the kind only a really rich band can afford. Remind him there will be alcohol available, too. Alcohol and lasers, ladies. That’s something he can’t get at those planetarium laser shows (unless he’s really sneaky).

Plus, this being a rock concert, of sorts, your fellow will have the opportunity to dress up, or rather down – or in many cases, dress like he normally does whenever he’s not at work. Tattered jeans? Kid Rock T-shirt with no sleeves? No problem. Encourage it. Remember, he can’t embarrass you. It’s an arena show; most people will dress worse. Some will have pierced heads and facial tattoos to boot.

Then there’s always the simple guy-friendly fact that Coldplay does at least play guitars and drums at fairly high volume – at least when Martin isn’t tickling the keyboard and being sincere about something or other. In truth, there’s a chance your fellow will become a fan before it’s all over. Of course, if he does, he’ll never admit it to you. 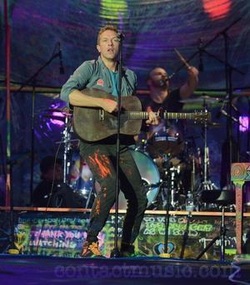 British rockers Coldplay spent an estimated $640,000 (£400,000)-a-night to supply fans with flashing wristbands that lit up in time to the beat of their music at concerts.

The electronic bracelets have been worn by revellers around the world on the band's Mylo Xyloto Tour, filling venues with colour during the group's hits, but frontman Chris Martin recently revealed he and his bandmates were reconsidering using the cool gimmick because it was proving too expensive.

He said, "Most of the money we're earning on the tour is put into the wristbands. We have to figure out how to keep it going without going broke because it's a crucial part of the concert."

Now guitarist Johnny Buckland has put a price on the bracelets, revealing it has cost the group more than half a million dollars a night to fund the initiative, but he hopes they will be able to continue handing out the light devices for free at gigs - because it really turns concerts into amazing experiences.

He tells Bauer Radio, "It looks amazing, it just makes everyone have a great time, most of all us - and it just feels so magical." 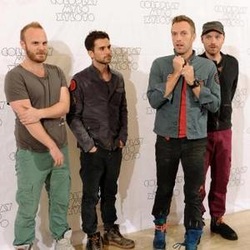 14th june 2012
Coldplay are planning to perform smaller concerts from now on because they believe they are not handsome enough to compete with Take That.

Coldplay aren't handsome enough to compete with Take That.

The 'Princess of China' group - who are famous for the flashing wristbands they hand out a their concerts to create a lightshow - have decided to scale down their live performances following a recent stadium tour because they can't compete with the good looking boy band.

Lead singer Chris Martin said: ''I think what we do next will probably be something quite small, but that doesn't mean we don't love doing the big stuff! It's probably good for us to mix it up a bit. You can't keep trying to get bigger and bigger, you can't try and compete with Take That! They do have Robbie Williams and Gary Barlow, they have those five handsome men and you don't need wristbands when you have that much talent in the looks department!''

Meanwhile, guitarist Jonny Buckland has encouraged people to come to their concerts even if they are not fans of Coldplay's music because the light show is so good.

He told Bauer Radio: ''It looks amazing, it just makes everyone have a great time, most of all us and it just feels so magical! So we're just immensely grateful for them. Even if you don't like our music now, I would say come to the show just to see that - wear earplugs, bring a book and when the lights come on have a look!''

The full interview and exclusive Coldplay gig will be aired tonight from 8pm across 20 Bauer Radio stations in the UK. Visit www.coldplayindemand.com for more information. 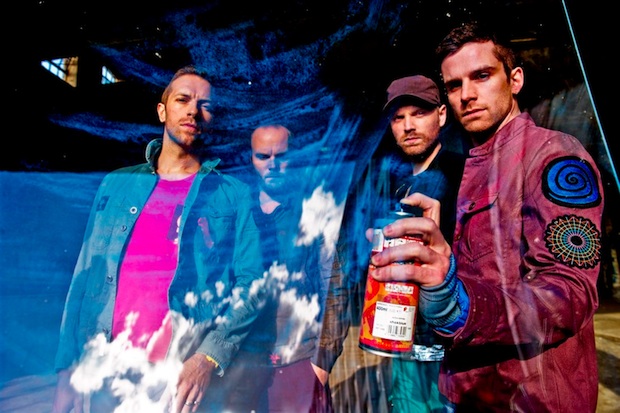